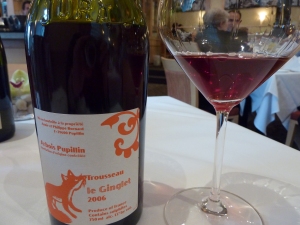 Le ginglet or little fox is the name Philippe Bornard has given his 100% Trousseau from Arbois Pupillin.  That’s quite a moutfull – I’ll break it down for you.

Arbois (ahr-bwah) is the most important appellation in the Jura region in eastern France.  It also happens to be the name of the region’s main town.  Arbois Pupillin is a commune within the Arbois, with rights to its own appellation.  The Jura is located between Burgundy and Switzerland and its isolation has helped its producers maintain many of their winemaking traditions; some unique varietals and some uncommon wine styles (we’ll touch on those later).

Five varietals are important in this region: Chardonnay, Pinot Noir, Poulsard (often called Ploussard), Trousseau and Savagnin.  Trousseau and Poulsard are the region’s indigenous black grapes (Savagnin is white).  Trousseau is more robust and deeply-colored than Poulsard and gives wines that are earthy and mineral-driven, with lots of berry notes.  You can see from the picture that the wine is a beautiful magenta color and not very opaque – Poulsard is even lighter, often appearing more like a rosé than a red.  Trousseau’s not a very tannic (think mouth-drying) wine and it’s also tasty with a light chill on it, making it an outstanding summer red.  Trousseau can also refer to a wedding dress, a dowry or the Bastardo grape fround in Portugal.

Philippe Bornard is a biodynamic winemaker who started making his own wines in 2005 (instead of selling his grapes to cooperatives).  In addition to an eye-catching label, this wine also has a bright orange wax top – Philippe hand-dips each bottle.  Wines from the Jura aren’t plentiful in the U.S. marketplace, but you can always enjoy come enjoy one with us.

One response to “Little fox”