New Jersey. Home of Bon Jovi, the Boss and some pretty insane liquor laws. Take a look at this picture:

If you look closely, you’ll notice greeting cards along the right hand side of the aisle. Sympathy cards as well as some birthday cards are probably best accompanied by booze, but this is not a thoughtful liquor store, this is a Rite Aid. As my friends and I were gearing up for a night of wiffleball and fajitas in the ‘burbs, we had to leave the grocery store in order to buy beer from the pharmacy.

I’ve shopped for a decent amount of alcohol beverages in my time, but I can’t say I’ve ever browsed for it under harsh fluorescent lighting while others in the same store were filling prescriptions or buying toilet paper.

Here’s another curiosity I encountered: 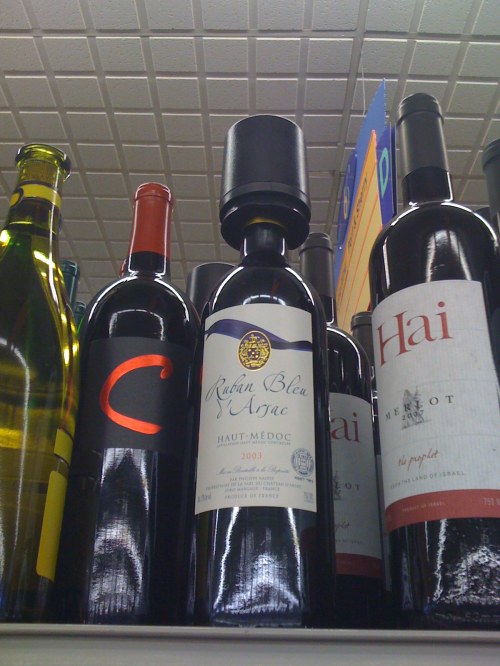 The curiosity I’m referring to is not the idea of buying a 2003 Haut-Médoc from Rite Aid, but rather the security device affixed to the top of the bottle. I doubt the concern here is about counterfeit wine (similar looking devices can be hooked up using a USB cable to a computer to detect if the wine has been opened or altered).

Residents of New Jersey are not allowed to purchase any alcoholic beverages over the phone, via a mail-order catalog or from the internet if the producer or retailer is in another state. Perhaps the thinking is that these restrictions make swiping a bottle from the corner drug store more tempting? Or maybe it’s that the fancy razors and the addictive cold medicines are taking up too much room behind the counters.