King of the wine frontier 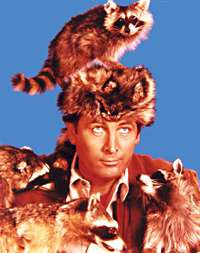 Yes, Davy Crockett makes wine. In fact, he’s currently celebrating his 20th anniversary in the business. Don’t get the wrong idea – this is no coon-skin-cork swill – this is good stuff. Fess Parker is his real name and before getting into the wine business he was an actor best known for playing Davy Crockett (catchy theme song here) and Daniel Boone.

Today I was at a lunch hosted by Tim Snider, his CEO and son-in-law, Lauber Imports and Dendor Wines, to honor the Fess Parker Winery & Vineyard.

The winery and vineyards are located in Santa Barbara County, a region made famous by the 2004 movie Sideways. Throughout the film, the main character Miles (Paul Giamatti) poo-poos Merlot and praises the virtues of Pinot Noir. Believe it or not, Britain’s The Sunday Times reported that the film had a direct impact on wine sales in the western part of the United States – Merlot sales dropped 2% and Pinot sales went up 16% following its October release. Amazing that people would follow the advice of someone who chugged from the spit bucket.

The cooling winds from the Pacific Ocean, the mountains and the abundant sunshine make Santa Barbara County a great region for Pinot. But after what I tasted today, I think it’s an even better region for Rhône varietals (think Grenache Blanc, Syrah). Fess Parker makes many different wines at different price points, from value wines to single vineyard wines and one of them is even called Frontier Red.

Here’s what we tried:

1. Epiphany Grenache Blanc 2008. creamy texture with notes of lime, melon, minerals and wet dog (in a good way) backed up by bright acidity.

3. Parker Station Pinot Noir 2007. I found this wine online for as low as $8.99. I’m always afraid of inexpensive Pinot Noir because it tends to be gross, but this was good juice. cherry cola and violets with light spice and a nice earthy quality.

4. Fess Parker Bien Nacido Vineyard Pinot Noir 2002. this wine is no longer available, but Tim showed it to us to illustrate how the winemaking style at Fess Parker has changed over the years. this was a big, concentrated, highly extracted wine – more like a Syrah then a Pinot, with notes of stewed fruits, leather and mushrooms. Go figure that it was in the top 15 Pinots from California in Wine Spectator upon release and got a 93 from Robert Parker.

So, like I said, this was no (Daniel) Boone’s Farm hogwash, but you might consider taking a bottle on your next camping trip – or maybe just enjoy one with your next dinner in the city.