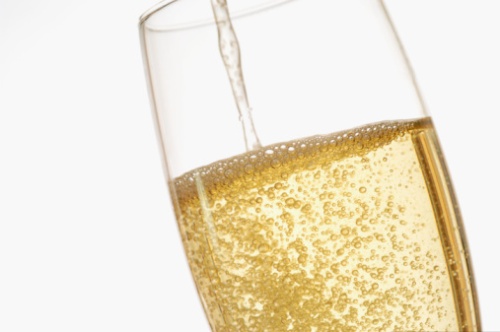 Last week I explained how Champagne is made, but not all producers of bubbly follow the traditional method.  There are a few other ways to go.

1. Transversage: a twist on the traditional method.  Think about all those different sized bottles that Champagne comes in – half-bottles, the adorable splits (187 ml) and the big boys with fun names like Methuselah (8 bottles) or Balthazar (16 bottles) – going through the strict tradtional method with all of these would get out of hand.  Instead, immediately after disgorgement, the sparkling wine is put into a pressurized tank where it receives its dosage and then gets transferred to different sized bottles.

2. Transfer Method: a combination of individual bottle fermentation and bulk clarification.  This process follows every single step of the traditional method up to and including the liqueur de tirage, individual bottle fermentation and bottle aging.  There is a period of lees aging, too.  Instead of riddling, however, the bottles are chilled and their contents are transferred (get it?) to a bulk pressure tank where sediment is removed.  The bottles are washed and refilled with the newly filtered sparkling wine.  It may say “fermented in the bottle” on the label, but the kicker is that it wasn’t necessarily that bottle.  Producers will save some time and money by nixing the riddling process.

3. Continuous Method: was developed in the USSR and is now used in Germany and Portugal.  A network of (usually) five tanks are under five atmospheres of pressure – the same level of fizz in most sparklers.  At one end, the base wine together with sugar and yeast is pumped in and the second fermentation begins.  As you know, this second fermentation will create additional pressure (from released carbon dioxide) in the tank, but the yeast cannot thrive under this pressure, so additional yeast has to be added continuously.  The second and third tanks are partly filled with something like wood shavings to provide some surface area for the dead yeast cells to accumulate.  This is where autolysis (the breakdown of the yeast cells) occurs, giving us that toasty, nutty bouquet.  The fourth and fifth tanks don’t contain any yeast cells.  The wine comes out pretty clear, having spent an average of 3-4 weeks in the system.

4. Charmat process or tank method: If two names weren’t enough, you may hear it referred to as cuve close (French for sealed tank) or bulk method.  Eugene Charmat developed it in the early 20th century in Bordeaux.  It’s cheaper, faster and less labor-intensive than anything we’ve discussed so far.  It’s best suited for wines not intended for aging.  The base wine is held in a pressurized tank where yeast and sugar are added to provoke the second fermentation.  There’s no lees aging here; instead the emphasis is on the youthful, floral and primary fruit aromas – think Prosecco.

5. Carbonation: yup, just like Coca-cola.  Also carries the charming names injection and bicycle pump method.  Carbon dioxide is pumped from cylinders into a tank of wine which is then bottled under pressure.  Since the carbon dioxide is not created within the liquid, it never really integrates – the bubbles are bigger and dissipate quickly.  This is the cheapest method of all, but fear not, it only accounts for about 10 percent of sparkling production.