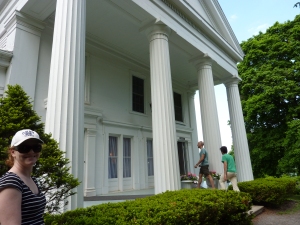 The tasting room for Miles Wine Cellars is in a Greek revival style mansion built in 1802.

The current owners learned their house was a stop on the Underground Railroad when they discovered Civil War-era pennnies in the cistern.  A local historical society confirmed that the pennies had been minted by banks in the South and that they were most likely left behind by former slaves grateful to be escaping.

The family has also had many paranormal encounters since living and working there – mist in the kitchen, slamming doors, flying comforters.  Most of the activity has been more inconvenient than frightening, but the owners have admitted to taking great care in cleaning and maintaining the cemetery that’s on the property.

They’ve also created a wine in honor of the newlyweds who lived there in the mid-19th century – a light and fruity blend of Chardonnay and Cayuga White labeled “Ghost”.  It’s believed that the groom met an untimely end by falling off a ladder while changing an oil lamp on the front porch and his new bride died soon after of a broken heart.  They’ve been spotted throughout the house, but most frequently on the front porch and usually in classic Victorian garb.  END_OF_DOCUMENT_TOKEN_TO_BE_REPLACED