In this week’s The Talk of the Town in the New Yorker, Michael Schulman hosted an unofficial summit with egg experts to discuss the recent recall of more than half a billion eggs.  His guests were Dave Arnold from the FCI and Stephen Morse, an epidemiologist at Columbia.  They gathered at L’Ecole and feasted on all things eggy.  I was tickled when I saw this sentence:

He {referring to Morse} sipped his cocktail, a Johnny Apple-Fizz, made with raw egg white shaken into a foam. “Wonderful!” he said.

The fizz was a creation by Marcella, which I helped her tweak.  We were looking for some flavors that would help us ease into fall.   She stopped by my office with a tray full of cocktails (which, delightfully, is a fairly common occurence), and this is what we came up with.

Combine all ingredients except soda in a shaker and shake vigorously.  Add soda and ice; shake again.  Strain into a chilled martini glass. 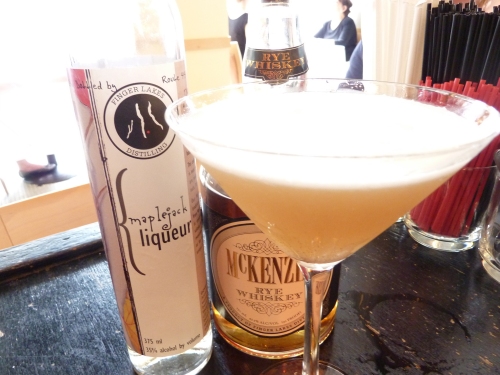 The Johnny Apple-Fizz. Light and refreshing, with spiced, apple notes.