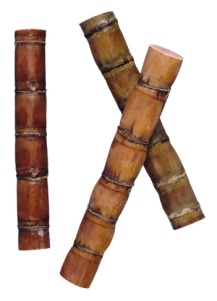 Thirsty humans can be a creative lot, making a spirit from a perennial tropical grass.

Rum is produced in over 100 countries today. While many consider the Caribbean to be rum’s home, accounts from the time of Alexander the Great mention the use of sugarcane.

While the exact origin of sugarcane is not known, it was introduced to Europe by the Arabs around 636 A.D. It never took off though, because it needed a longer growing season and warmer temperatures than Europe could offer. Columbus took cane cuttings from the Canary Islands to the West Indies. The early Spanish settlers working in sugar factories in the West Indies realized that the residual molasses from sugar production fermented easily.

The name rum could come from the Spanish ron – chances are good the Spanish were on to distilling before the British decided to use the sugarcane plantations in their colonies as a source of economic growth. It could also be from the Latin saccharum, meaning sugar, or from rombustion, meaning a strong liquid or my favorite, rumbullion, meaning a great tempest.

The two main types of rum depend on which form the sugar cane is in at the time of fermentation. Agricultural rum is made from freshly pressed sugar cane juice, while industrial rum is made from molasses, a by-product of the sugar manufacturing process. Agricultural rums are rarer, more expensive and tend to be found in Caribbean islands that were once French colonies. They are lighter in body and often more smooth than industrial rums.

In addition to the form the sugar cane is in when it’s fermented, the variety used and its terroir will also impact the final flavor of the rum. The water, the yeast and the barrel aging (or lack thereof) will all play a role, too.

While names and classifications vary from country to country, three types are universally recognized.

1. Silver/white – these are clear and light-bodied. Some countries require aging for a minimum of one year. Producers will use nonreactive containers or uncharred or used barrels. If the rum does see barrel aging, it will be filtered before bottling to eliminate any color that may have been picked up from the wood.
2. Amber/gold – darker in color and deeper in flavor, these rums have seen at least 2 years in wooden barrels. Sometimes caramel coloring will be added.
3. Aged/dark – these are full-bodied and pungent and have been aged in barrel for 5-7 years. In this category, you may find age-dated rums. These are rums from different vintages or batches that have been blended together to maintain a consistent style from year to year. The age on the bottle represents the youngest rum in the mix – i.e. 10 year old rum contains a blend of rums that are at least 10 years old.

Some of the most popular rums on the market today are flavored or spiced – mango, orange, citrus, coconut, pineapple, lime, banana, vanilla, all-spice, clove, the whole nine yards. Most of these have added caramel, so they’ll look like rums from the amber/gold family.

To sum it up, sugar and spice and all things booze – that’s what little rums are made of.