“Are they giving you wine back there or are you just listening to my bullshit speech?”

At last week’s conference, I attended a 3+ hour seminar on dry Riesling given by Terry Theise.   Terry’s often off-color comments and his selection of incredible wines made the time fly by. 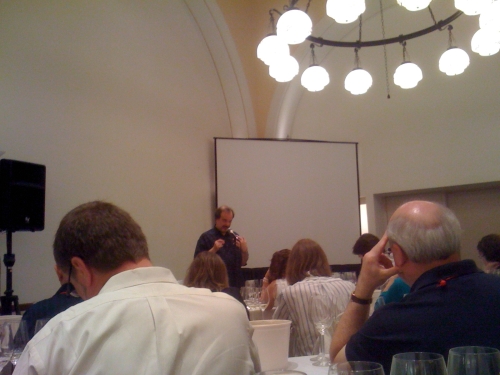 Terry "I put the heed in hedonism" Thiese. During the seminar he also described himself as a "grey beard" and a "silverback".

We sampled 20 German and Austrian Rieslings that Terry imports, attempting to help him answer two questions, “First, what is the nature of the market for dry Rieslings?  And, second, what can educators do to make it grow?”  We did significantly more tasting than question answering, but I can understand why consumers have hang-ups about Riesling:

Hopefully, with more time, education, and passionate folks like Terry or Paul Grieco, more consumers will get on the Riesling train.

Some highlights from the tasting, with average retail price: