Today’s Cava was called Champaña until the 1970s when the Spanish agreed to stop using the potentially misleading (i.e. too close to sounding like Champagne) term.

Cava is the Cataluñian word for cellar and this bubbly delight does share some similarities with Champagne. For instance, most Cavas are made using the traditional method and Chardonnay has been an approved varietal in the blend since 1986. Champagne was the inspiration behind Cava’s creation, too – Jóse Raventós, head of Codorníu (now one of the largest sparkling wine producers in the world), made a trip to France in 1872 and upon his return home, made the first bottles of sparkling wine in Spain. In 1889, Pedro Ferrer joined the Raventós family and later went on to found Freixenet (one of the other largest sparkling houses today).

While 95% of Cava is made in Cataluñia, grapes can also be sourced from Valencia, Aragón, Navarra, Rioja and the Basque country. Here t are the indigenous varietals used in the blend:

Macabeo (called Viura in Rioja): usually makes up about 1/2 the blend, fairly neutral, popular because its buds break late – this is important in areas prone to spring frost.

Cava was hands-down one of the highlights of my trip to Spain. By simply asking for a “copa de Cava” at any bar or restaurant, we’d be rewarded with a bubbly, refreshing, citrus-y, yeasty glass of wine that was less expensive than most draft beer in New York City (even with the exchange rate!).

Here’s a photo of one of my favorites – it was the house Cava at our hotel in Barcelona: 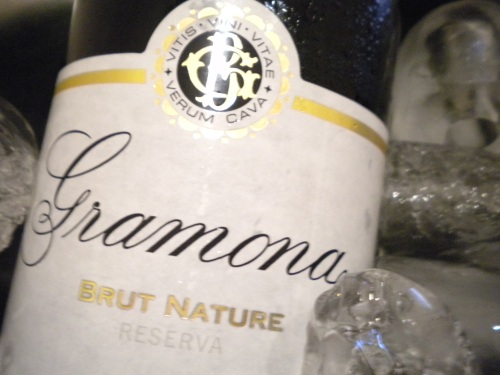 Gramona’s a family winery in the heart of Penedès – more specifically, at the foot of the very impressive Montserrat mountain range and they’ve been making Cavas over 125 years.

The family coat of arms is “Vitis, Vini, Vitae”, or the vine, wine, life – you can see it on the label if you look closely.  Verum cava refers to their certain idea of what Cava should be – essentially that vines cultivated in good soil by capable hands will yield a tasty product.

Based on my tastings (yes, I went back for more), I think they’ve done their job well.  This Cava had it all – fine bubbles, notes of citrus, apples, and toasty bread, great acidity and a creamy finish.