All Cognacs are brandies, but not all brandies are Cognacs.  The best ones are made from low alcohol, high acid grapes.  Sounds a bit like Champagne, don’t you think?  No wonder I like it! 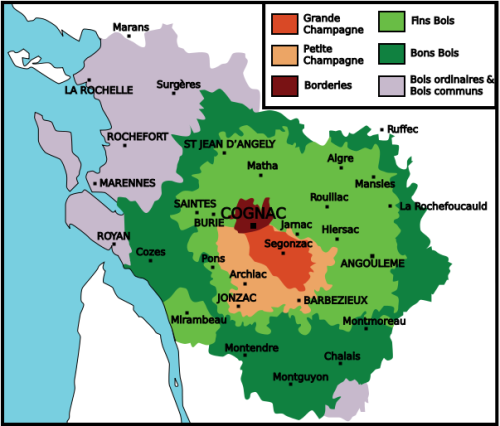 The Cognac region is just north of Bordeaux in the Charente and Charente-Maritime départments or districts of France.  The ancient city of Cognac, which sits on the Charente River is at the heart of the district.  The region was delimited by law in 1909 (i.e. to call your product a Cognac, it has to be made within the designated geographical area).  There are 6 districts or crus of Cognac: Grande Champagne (best), Petite Champagne (second best), Borderies (yup, 3rd best), Fins Bois, Bons Bois and Bois Ordinaires/Bois Communs.  You might also see Fine (feen) Champagne on a label and that means it’s a blend from the 2 best areas – Grande and Petite Champagnes.  The term Champagne here has nothing to do with the Champagne region, though both areas have very chalky soils.

Since this region is on a navigable river close to the ocean, its wines have long been popular in England and the Low Countries.  The wines didn’t travel well since they were fairly light, so distilling them became the way to go.  Distillation became pretty common in the 17th century, but really took off in the 18th century when a number of families came to the region to control the trade: the Martells from Jersey, the Hennessys and the Hardys from Ireland, the Hines from Dorset and the Otards from Scotland.

Cognac is the 3rd largest vineyard area in France and up to 8 different grape varieties are permitted.  The two most important are Ugni Blanc – pronounced ooh-knee and also known as Saint-Émilion or Trebbiano (in Italy) and Folle Blanche.  The distillation season begins the November after harvest and runs through the end of March.  The Cognac is double-distilled in a copper pot still and aged in casks of Tronçais or Limousin oak for a minimum of 2 years.  During this process, the spirit mellows and softens, taking on color and flavor from the wood.  Some will evaporate, too and this is called the “angels’ share”.

Let’s touch on a few other things you might see on the label:

You’ve probably noticed that the letters represent English rather than French words, pointing to the traditional importance of the English market.  Usually these letters are used together and since 1955, they’ve had age significance.  For example, VS is at least 2 years old, VSOP is at least 4 years old, XO is at least 6 years old.  The years represent the minimum amount of time the spirit spent in barrel.

Cognac can improve in wood for up to 55 years, but this is risky – there will be significant loss from evaporation and there’s a risk of over-aging, making the prices exorbitant.  Keep in mind that once the Cognac is bottled, it neither varies nor improves.  The producer has already done the work for you, so once you buy a bottle, just drink it (ideally not in one sitting) and once the bottle’s been opened, consume it within 6 months.