I was invited to a seminar yesterday on Wines of Brazil, featuring 14 wines and Brazilian cuisine (i.e. meat fest), hosted by Evan Goldstein, MS.  I did not go into the tasting with high hopes, but I left impressed.  The presentation was thorough, well-organized, and more importantly, many of the wines were delicious. 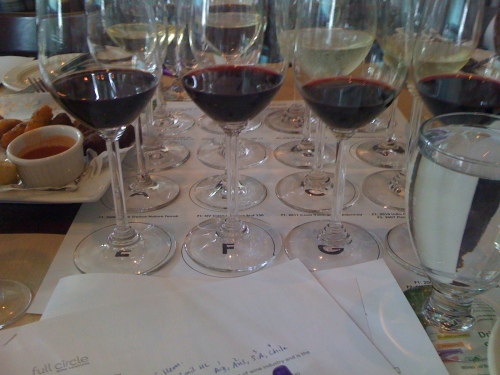 We sampled 3 sparklers, 2 whites and 11 reds, including some varietals that were new to me.

*Vines were first planted in Brazil by Portuguese immigrants in the 1500s.  The first Brazilian wine was produced in Tatuape, São Paulo, in 1551.

*The Italian immigrants started arriving in 1875, many of them settling in the Rio Grande do Sul, which now accounts for 60% of the country’s grape production.

*In the mid-1960s, the multinationals started to come in – Chandon, Pernod Ricard, Martini, Cinzano.

*In the mid-1970s, production expanded toward Uruguay.  The 1980s saw an increased focus on quality.  The kids started being sent abroad for enology courses.  In 1998, the Brazil Wine Institute was formed.

*Labrusca vines account for 73% of the plantings.  They use these grapes for jams, juices, concentrates and domestic table wine.

*1/3 of the fine wine production is sparkling (Pinot Noir, Chardonnay, Glera <Prosecco>, Muscat).  Most sparklers are produced using the Traditional Method, though we did sample a Charmat.

*There’s a great diversity of grapes.  Traditional French ones, such as Merlot and Cabernet Sauvignon; Tannat, like neighboring Uruguay; interesting crossings, which I’ll get to in a moment; Italian varietals like Glera, Moscato, Teroldego, Fresa.

*The finer wine regions are surprisingly moderate – averages of 53°F in winter and 71.6°F in summer.

*Soils vary region to region, ranging from granite and limestone in Campanha to Basaltic in the Serra Gaúcha. 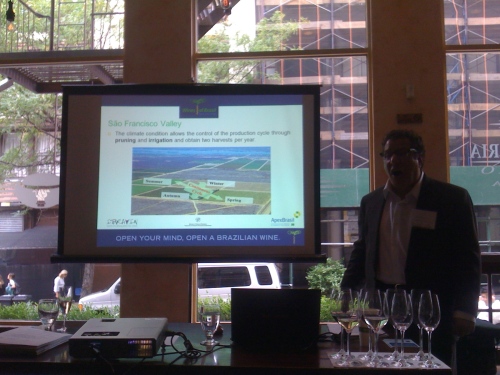 Evan doing his thing. What you may not be able to see on screen is a photograph taken in Pernambuco, of vineyards in 4 different season "states". Through irrigation, forced dormant periods, and other methods, growers have been able to trick these vines into 2 harvests per year.

On to the wines:

My favorite sparkler was the 2008 Cave Geisse Terroir Nature.  62% Chardonnay, 38% Pinot Noir, 12.5% abv, traditional method, only 970 cases produced.  Jancis Robinson is showing this wine at an Expo in Hong Kong at the end of October, as an example of what can be done in Brazil.  No importer for U.S. yet.

2007 Pizzato Reserva Egiodola.  The grape is pronounced edge-a-dola and means “pure blood” in Basque.  It was a cross made in the 1950s, in France, between Fer Servadou (Marcillac) and Arbouriu (Lot).  130 acres of it are now planted in Brazil.  Wild berries, white pepper, black tea, with a bite.  13% abv.  Metropolis Wine Merchants.

2008 Cara Perini Marselan.  Marselan is a cross between Cabernet Sauvignon and Grenache.  Producers in southwest France came up with it in the 1960s, when they were looking for color and crop.  Only 30 acres or so planted in Brazil.  Soft tannins, wild red fruit, herbaceous, great food wine.  12.5% abv.  Peninsula Beverage.

2007 Don Guerino Gran Reserva Ancellotta.  Ancellotta is an Italian grape.  You can find it in Lambrusco blends in Emilia-Romagna.  You can also find it in the Veneto and in Ticino in Switzerland.  I wrote, “rustic, animal, lovely”.  12.8% abv.  Looking for an importer.

*Castas is the term Brazilians use for varietal/cepage/cultivar.  Uva refers to grapes for eating. 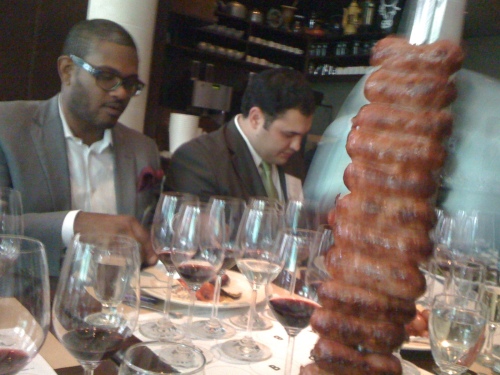 2 responses to “Wines of Brazil”