The Old Fashioned might have been the first drink to be called a cocktail.  I just purchased David Wondrich’s book Imbibe!…

, so when it arrives I’ll fill you in.  People can be oddly particular about cocktails, especially when the cocktail in question dates back to the 1880s.  Most recipes look something like this:

*1 1/2 to 2 oz. whisky (some prefer bourbon or rye over scotch and in the Midwest, they dig it with brandy)
*1 sugar cube with enough water to dissolve it (you can skip this step with simple syrup)
*2-3 dashes of bitters (most call for Angostura)
*an old-fashioned glass (also known as a lowball or rocks glass; essentially a short tumbler – gazing into the future, I can picture myself sitting in a rocking chair on the front porch, demanding that someone fill up “grandma’s tumbler”)
*oranges, lemon twists and cherries are common garnishes and some modern recipes call for the drink to be topped off with club soda (why dilute it?)

For the procedure, dissolve the sugar (or add simple syrup) in an old-fashioned glass, add bitters, add ice, add whisky and garnish.

I was recently experimenting with a twist on this drink.  When I have people taste Glen Thunder, I often hear “cornbread”.  I happen to like jalapeños in my cornbread and that’s what got this whole thing rolling.  You see jalapeños in tequila drinks all the time – why not corn whiskey?  I mentioned the idea to Seider at the Summit Bar and he made me an Old Fashioned with McKenzie Rye and Glen Thunder, spiked with jalapeños.

I didn’t see exactly what he did, nor did I ask him proportions, but I attempted to recreate it a few days later. 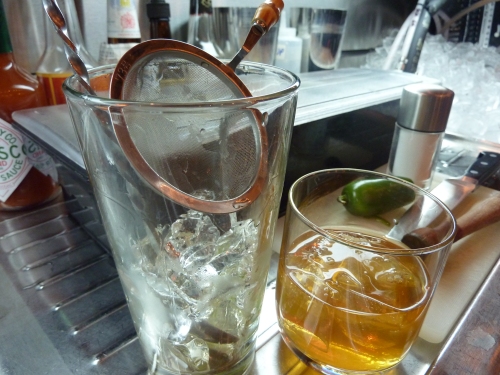 In a pint glass, I muddled 2 slices of jalapeños in simple syrup, added ice, 3 dashes Angostura bitters, 1 oz. McKenzie Rye, 1 oz. Glen Thunder, dash of salt and I stirred it and strained it into a rocks glass.

I was happy with the result, though I was jealous of Seider’s perfectly square and gynormous ice cube.  I gave it another try, thinking a little citrus might be nice. 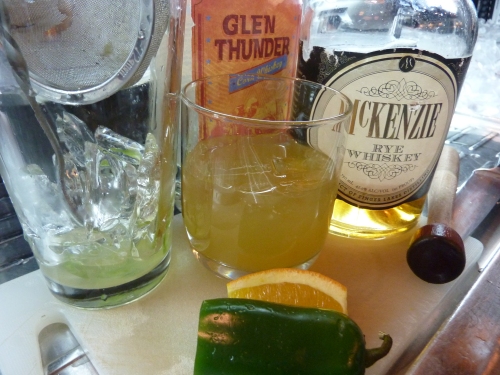 Same as above, with the addition of 1/4 oz. oj. Would be great to make this a completely clear drink. Nils? Dave?