I did make it to one winery while out in California – Porter Family Vineyards.

The vines (mostly Cab, some Syrah, Merlot, Malbec and Cab Franc) range in age from 3-20 years

The property is 20 acres, with 13 under vine - check out those terraced plantings

The Porter Family vineyards are at 600 ft.

Specifically, the winery is in Coombsville region of Napa Valley and the Porter Family is among those lobbying for the area to receive its own AVA – American Viticultural Area – designation.  The soils are old and volcanic.

While digging their cave, the Porter Family came across a piece of sandstone covered in volcanic ash with fossilized sandpiper prints that is over 20 million years old (they had it tested).  It made sense, then, that we were greeted with their 2008 “Sandpiper” Rosé – 100% Syrah with lots of red fruits and bright acidity. 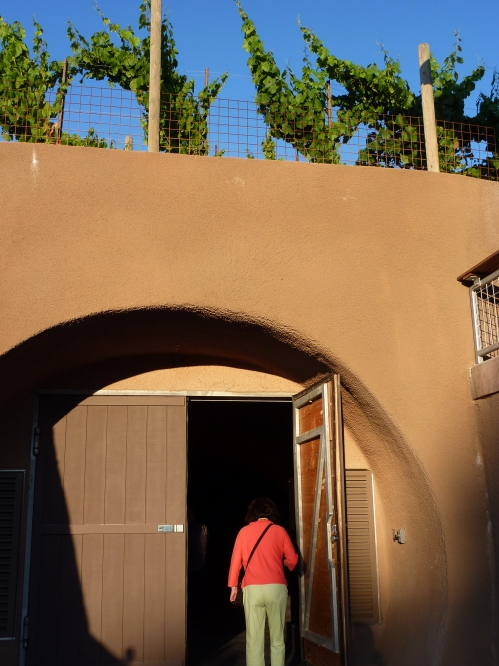 Throughout the evening, we also tried their 2006 Sandpiper red – a 50/50 blend of Cabernet Sauvignon and Merlot that had distinct elements of both varietals – the currant and cedar from the Cab and the plummy softness from the Merlot, their 2006 Syrah, which was also varietally classic – white pepper, violets and berries and their 2005 Cabernet Sauvignon – full and chewy with vanilla and coffee on top of the berries.  The two special treats were a barrel sample of the 2008 Syrah (similar notes to the 2006, just not as integrated yet) and the Cabernet Sauvignon Blend across 3 vintages – 2005, 2006 and 2007.

In theory, it’s an interesting idea – the bold, bright fruit of a young Cab and the more developed flavors of a Cab that’s had some time to age in the barrel.  It’s like getting the best of both worlds in one bottle of wine.

They don’t yet have a scheduled release date nor would they tell us the name they plan on using (proprietary and not yet registered), but I hope they give the wine more time, as the flavors didn’t seem pulled together quite yet.

Champagne and Sherry notwithstanding, most vintage-dated wines are superior to non-vintage wines, but perhaps the Porter Family’s looking to change that.  If you know of anyone else doing similar experiments, please leave a comment.