And you thought they just produced Shiraz

Today I attended the Landmark Australia Master Class, featuring an impressive line-up of Australian Riesling and Pinot Noir.  It was an invite-only tasting and I heard about it through the Sommelier Immersion Program I’m currently enrolled in, through Wine Australia (more about this later). 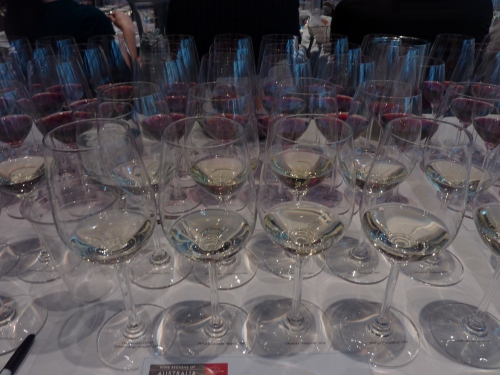 After skiing, the best thing to do on a snowy, wintry day - cuddle up with 25 wines.

These folks are really smart.  They are putting exciting wines in front of sommeliers, retailers, educators, writers, restauranteurs, importers, and distributors, and it’s working.

My ideas about Australian wine have completely changed over the last few months, and I’m not alone.  Sure, the country has inexpensive, mass-produced wines on one end of the spectrum and expensive, overly-extracted wines on the other, but they also have cool-climate varietals that deserve a place at the dinner table (and on thoughtful wine lists).

*The 6 2010 Rieslings we sampled were dry, elegant, sometimes fruity, sometimes floral and had, as Paul Grieco called it, “a bone-crushing acidity”.  Michael said to drink these wines now would be “vinocide” and he’s right.  You can see their potential, but some of them won’t even be released to the marketplace for another 5 years.  My favorite was the 2010 Grosset Polish Hill Riesling from Clare Valley – concentrated, yet delicate with lots of kaffir lime.

*The “spiritual home” of Riesling in Australia is South Australia, particularly in Clare and Eden Valleys.  Eden is slightly cooler than Clare, so the Eden Rieslings tend to be a little tigher, with higher acidity and more rose and floral notes, while the Clare Rieslings have more lime and citrus.

*An attendee asked whether some residual sugar in the Rieslings would make them more approachable in their youth.  Tom commented that if you have r.s. at the get-go, the wines will get more sweet with age and won’t gain as much complexity as a dry wine.  I bet there are plenty of Germans out there who would disagree.  Michael noted that the grapes can get ripe enough in Australia to be fermented dry, and create a balanced wine.

*The aged Rieslings we sampled – one each from 2002, 2003, 2004 and 2005 – took on toasted honey and fig characteristics.  My favorite was the 2004 Peter Lehman Wigan Riesling from Eden Valley – toasty and honeyed notes, but still had incredible freshness.

*Pinot Noir accounts for about 2% of Australia’s production (Riesling is not much more).

*MV6 is the most widely-planted clone.  MV stands for “mother vine” and it came from one of James Busby’s cuttings in 1831 from Clos Vougeot.

*The panel indicated that quality Pinot Noir in Burgundy needs the following things: continental climate, limestone-based soils, cold climate, northerly latitude, old vines (>50 years) and selection massale.  Where they may be missing some of these factors in Australia, they do have these: high altitude vineyards, southerly latitude, continental climate (in terms of diurnal temperature shifts), and a maritime influence.

*Michael remarked that “Pinot Noir needs tension on the palate” and most of the reds we tried were nervy, indeed.  My favorite current vintage was the 2008 Wines by Farr Sangreal Vineyard from Geelong, Victoria – black fruits, red fruits, earthy spice and some carbonic maceration qualities.  The older wine winner for most of the group was the 2000 Yering Station Reserve from Yarra Valley (mine was oxidized).

*Michael likened Pinot Noir in Australia to rock n’roll – it’s exciting, and being embraced and supported by their local market.  It’s probably a welcome relief for folks who are used to drinking jammy, 15%++ alcohol wines.

*Tom closed by reminding us that Australia hasn’t yet hit its Pinot Noir potential, indicating that Burgundy has already made their best wines and that their challenge is to keep it up.  He imagined it was quite a bit of pressure to make a La Tâche every year.

I look forward to following these producers, as they get closer to finding their stride.

One response to “And you thought they just produced Shiraz”