How much would you pay for a bottle of wine?

Reuters reported yesterday that a six-liter Methuselah of Romanée-Conti 1976 sold for $42,350 at Sotheby’s New York. 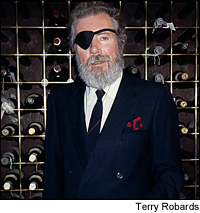 This guy used to own that bottle. His cellar eventually netted over $1.18 million dollars.

Romanée-Conti is one of the 6 Pinot Noirs from Domaine de la Romanée-Conti, the most prestigious Burgundian wine estate (you’d hope for that price, right?), based in Vosne-Romanée.

The bottle once belonged to Lloyd Flatt, an eye-patch wearing, New Orleans-based wine collector.  Flatt began hunting for world-class wines in the late 1960s and the Wine Spectator quoted him as saying, “Forty years ago, collectors had nothing to go by other than their own palates. Michael Broadbent had yet to write his Great Vintage Wine Book, Marvin Shanken had yet to buy Wine Spectator and Robert Parker was still in law school. My advice to anyone contemplating a wine collection today is to focus. Find something that you enjoy. Don’t try to explore everything all at once…Unlike an art collection, which is permanent, wine ultimately must be consumed. You shouldn’t even contemplate a cellar if you cannot accept that fact.”

For you nerdy folks out there interested in names for various bottles sizes, here is a chart I recreated from my Oxford Companion.

Collectors often favor larger format bottles, as they can lead to slower and more subtle aging of the wine.  As soon as you start your own winery, you’ll be able to begin a collection as impressive as Flatt’s.

2 responses to “How much would you pay for a bottle of wine?”