In honor of the opening weekend of Finger Lakes Distilling and its owner’s birthday today, let me introduce another one of their spirits.

When I tasted the corn whiskey, this is what I came up with:

The aroma of this whiskey is reminiscent of pulling back the husk from an ear of sweet summer corn.  On the palate, it’s crisp yet mellow, with toasty, caramelized notes and a meaty finish – think cornbread with bacon!

This is what master distiller Thomas had to say about it (I promise he really said this.  You have to meet him):

“Corn whiskey is a true southern favorite; this is an honest, true corn whiskey, made like they do it in the hills and hollers of south Alabama. It smells like Dunkin Hines cake mix comin’ off the still.  Yankees beware, put some south in yo mouth!”

This corn whiskey is unaged and bottled right from the still, but don’t be afraid – it’s surprisingly easy to drink.  The Glen refers to the racetrack at Watkins Glen.  I thought it would pair well with something a little sweet and a little spicy, so I opted for fresh blueberries and ginger ale.  Here’s the recipe: 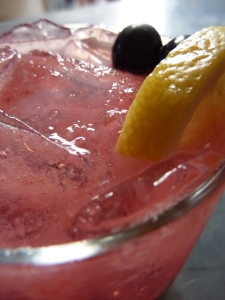 Don't be fooled by its innocent pink color

Muddle blueberries (enough to fill a rocks glass, single layer) with juice of ½ lemon, salt and simple syrup.  Add corn whiskey and shake with ice.  Pour back into rocks glass, top with ginger ale and garnish with blueberries and lemon.

This drink goes down real easy, so watch that you don’t go off to the races.