This past Sunday, I got put to work at Red Tail Ridge winery, which is located on the west side of Seneca Lake, in the Finger Lakes.  It’s a husband and wife operation that opened in 2005.  They’ve got 34 planted acres of Riesling, Chardonnay, Pinot Noir and some other fun varietals like Teroledgo (primarily grown in NE Italy) and they’re the first LEED-certified (Leadership in Energy and Environmental Design) winery in the region.

The main goal of the day was racking (aka moving from one container to another) Lemberger.  Lemberger is the German name for Austrian Blaufränkish or Hungarian Kékfrankos.  Wines made from this grape tend to have great acidity, dark cherry and smoky notes, and medium tannins.

The first step was to prepare the tank by filling it with nitrogen. The nitrogen would form a blanket over the wine once it was in the tank, protecting it from exposure to oxygen.

I spent a lot of quality time with this pump. Gina, a current student in Viticulture and Wine Technology at Finger Lakes Community College, is in the background. She's been interning at RTR since April and was incredibly helpful. I've picked grapes before and I've read about winemaking, but using the equipment was all new to me. 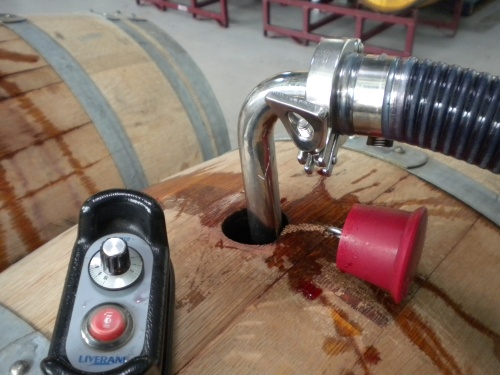 It was my job to empty 16 barrels of 2009 Lemberger into tank. On the left is the remote control for the pump, where I controlled the speed and direction of the wine flow. I had to pay attention and stop the pump at the right moment, so as to not suck up any excess oxygen. I spent most of this time with a flashlight in one hand peering into the bung hole and the remote control in the other.

After the barrels were emptied, they had to be cleaned and this we did with a powerwasher. We had to clean them right away because the next step was to then fill them with 2010 Lemberger that was waiting in another tank. 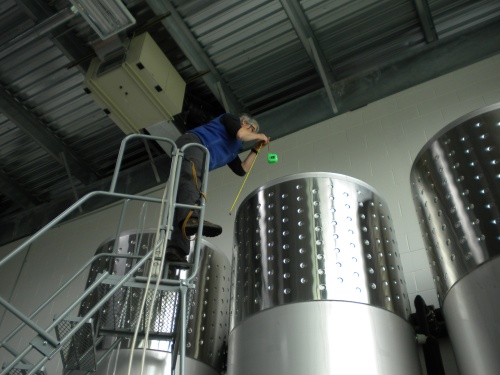 Nancy, the owner, checking the fill level on the tank. Filling the barrels looked a lot like emptying the barrels, just using the pump in the opposite direction. Before I got started, Nancy made sure I had a change of clothes. She doesn't like a lot of head space in her barrels and she anticpated that I might end up with a wine geyser as a first-time barrel filler. Luckily, I didn't embarass myself.

In one out of the 16 barrels, Nancy inserted a stave, which would impart more oak qualities (tannin, structure, sweet spice, etc.) to the final blend. The stave itself smelled like bacon and eggs. 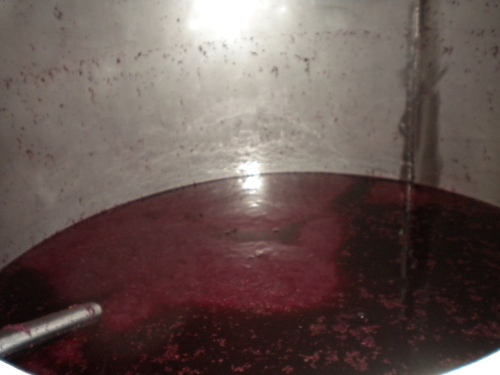 Here's the sludge that was left at the bottom of the tank, once we had filled our barrels. I got to scrape it out with a dustpan. I was told not to inhale very deeply while my head was inside the tank, as there was quite a bit of CO2 left. Very glamorous stuff. 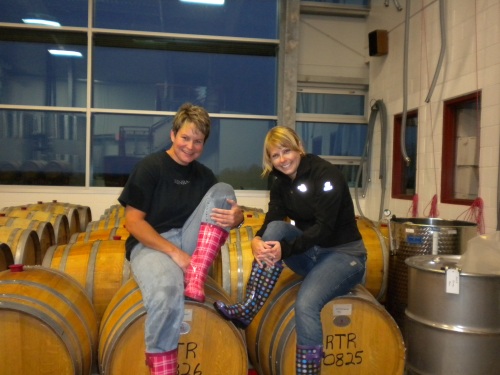 Some take-aways:
*I will never complain about the price of an artisanal wine now that I have a better idea of the amount of work/love/sweat that goes into each bottle.
*I couldn’t help but think of the video I posted a few months ago, where winemaking was described as “49% cleaning shit, 49% moving heavy shit around and 2% drinking beer”.

I was invited back, so stay tuned for more winery adventures!

One response to “Working at Red Tail Ridge”