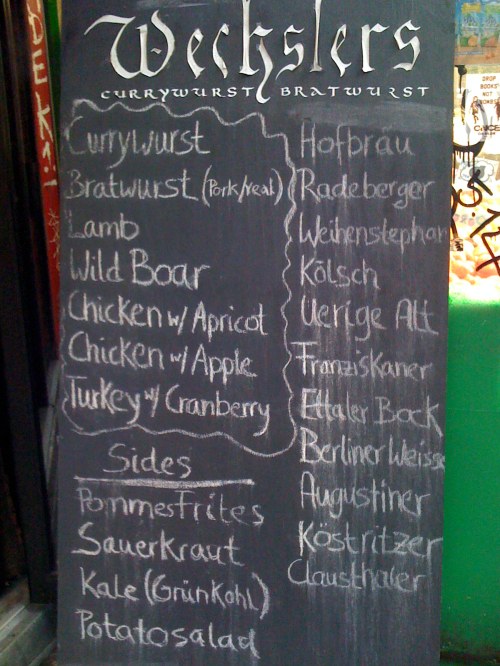 Weschlers Currywurst opened in a sliver of a space in the East Village (1st Ave between 7/8) just a few weeks ago and is a German beer lover’s dream. It came about because its owner, Andre Weschler, missed the currywurst from his German hometown of Hamm. He must be doing right by the currywurst because in the few hours we were there, several German parties came by to eat, drink or just say, “Guten Abend!”

This is what’s currently on tap:

Kölsch is a traditional German ale and the local brew of the city of Cologne (“Köln” in German). It’s one of Germany’s palest beers and tends to be less bitter than their standard lager, Pils. You can’t always find it in the U.S., but if you do, it’s likely to be either Reissdorf or Gaffel. It’s always served in a 0.2 liter (6 3/4 oz.) straigt-sided glass called a Stange (stick, pole or rod) like this: 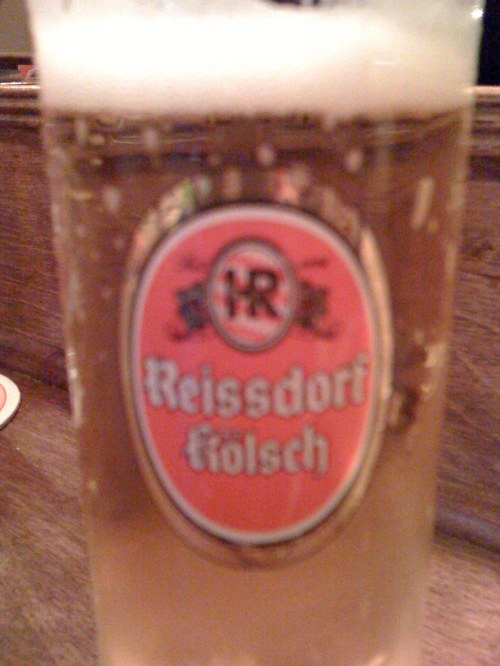 Hofbräu ia one of Munich’s oldest breweries. They make a lager, a dark beer and a wheat beer – the original is their lager and follows the German Purity Law which states that beer can only be made from 4 ingredients – malt, yeast, hops and water. This is no longer enforced, but Hofbräu still abides by these standards.

Uerige: deep amber in color, full-bodied, aromatic with with notes of caramel and toffee.

This is a German style brown ale or Düsseldorf altbier that’s been brewed since 1862. Interestingly enough, the German bartender pronounced this yule-e-ger. He said the u followed by the e is the equivalent of a u with an umlaut (ü).

Radeberger was the 4th beer on tap. The brewery started in 1872 in Radeberg, a suburb of Dresden and was the first German brewery to brew beer exclusively in the Pilsner style. I’ve had it several times before (straw, apple, citrus, very refreshing), so I didn’t opt for it tonight, but I did observe the bartender making a cocktail by combining it with Sprite. This was unlike any shandy I’d seen before and he explained it was called “The Radler”, which means cyclist in German (light enough for them to finish the race?).

We tried this one offered by the bottle:

Schneider Weisse Brooklyner Hopfen Weisse: this was the star of the evening – orange, clove, banana, yeast. liquid gold in color – full and smooth. 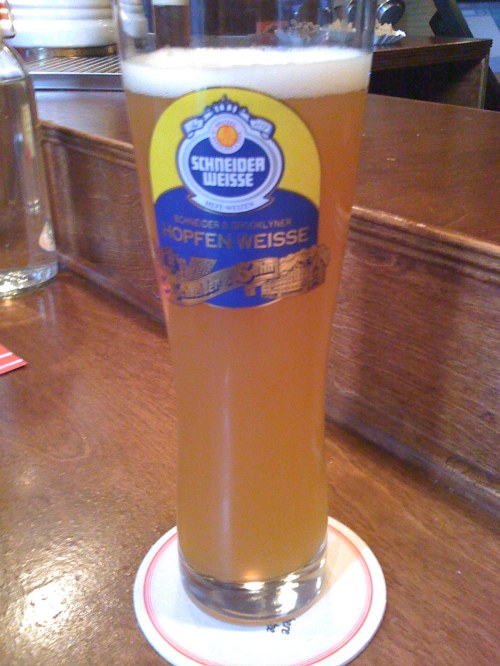 This is the German version of the collaboration between Brooklyn brewmaster Garrett Oliver and Hans-Peter Drexler, the brewmaster from Schneider. We ordered this one because our friend asked the bartender for the beer with the highest level of alcohol. I’ve got to get my hands on the Brooklyn version (different bottle, different hops used).

I know we’re supposed to be focused on beverages here, but it’s worth the trip for the sausage, too – currywurst, boar, chicken and apricot, and merguez were all juicy and delicious. The hand-cut fries made a nice showing, too. All of this greasy deliciousness was a perfect complement to the impressive roster of German brews.

2 responses to “Woo-hoo for Weschlers”